By how much have each Council changed their Council Tax charges this year? 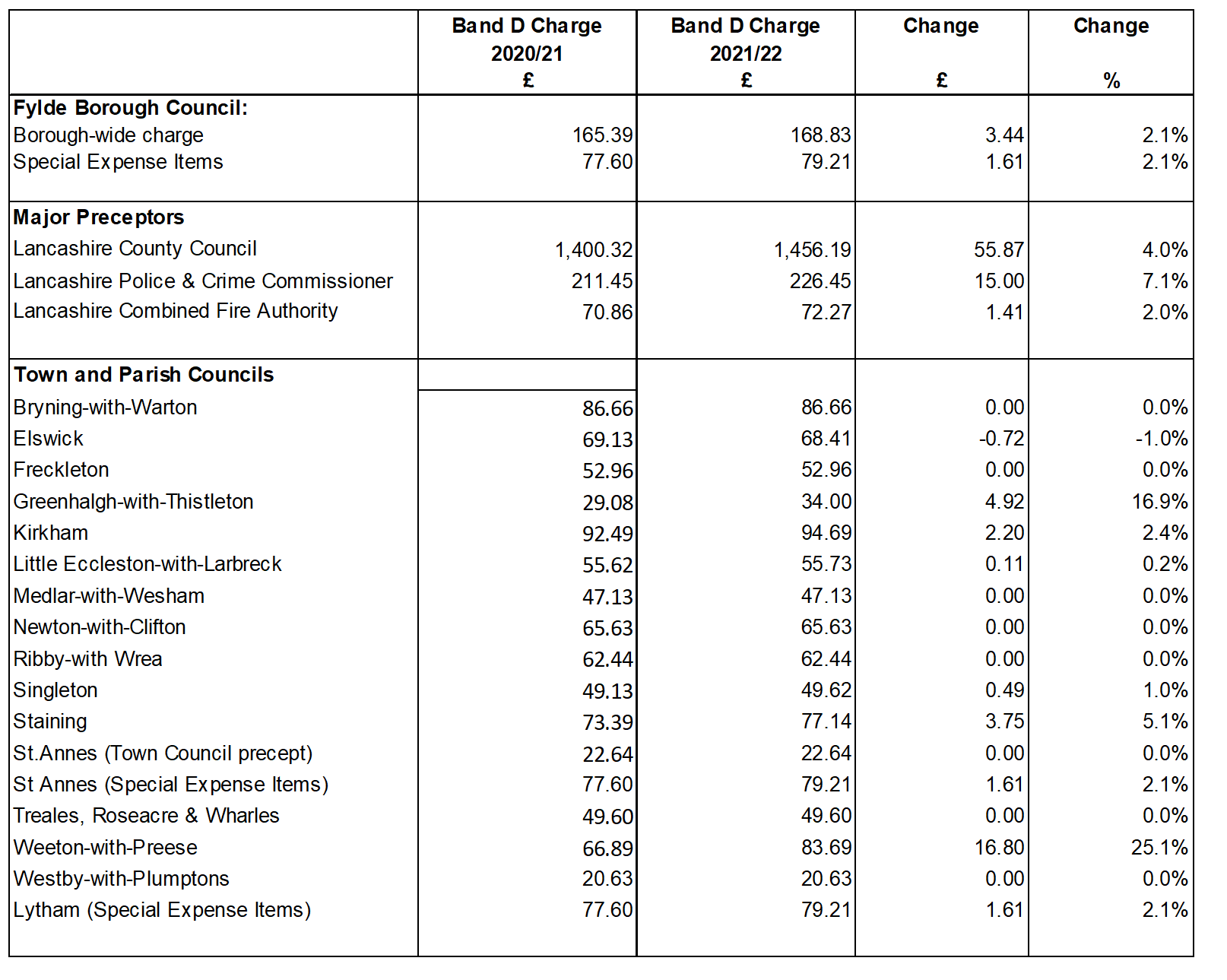 By how much has my TOTAL Council Tax changed this year?

The change on last year will depend on which area you live in. The following list shows the total change in respect of Lancashire County Council, Lancashire Police and Crime Commissioner, Lancashire Combined Fire Authority, Fylde Borough Council (including Special Expenses) and Parish / Town Council precepts compared with last year:

This is because in parished areas you will pay an amount to the local parish or town council, and some areas also pay special expenses. The increases will be different for each area. Fylde Borough Council collects Council Tax on behalf of a number of public sector organisations in the area. We collect the money from you and pass it on to them. Your bill is therefore made up of:

What are Special Expenses?

What are “Open Space Assets”?

These are parks, gardens, play areas, and open spaces within the Borough. Examples include Ashton gardens and promenade gardens in St Annes and the Green in Lytham.

Why do we pay Special Expenses in St Annes when we have a Town Council?

How much does the Council raise with every 1% increase in Council Tax?

Every 1% increase in Council Tax raises approximately an extra £66,000

Why is Council Tax worked out on a band D? I live in a band H and my figures are different.

Every Council is required by law to declare its “Band D equivalent” Council Tax. This is the figure upon which the annual increase from the previous year is calculated. It is a very complicated calculation which converts the number of properties in other bands to “band D equivalents”.

Full details of how much people pay in all bands and all areas can be found on the Fylde Borough Council website at: http://www.fylde.gov.uk/counciltax

If the overall increase in average Council Tax charges in respect of Fylde Council is 1.99% why does my bill show an increase of 2.1%?

Both of the individual elements of council tax charged by Fylde Council (i.e. the standard borough-wide charge and the special expense charge) are increasing by 2.1% compared to last year’s charge. This is what you will see on your council tax bill.

What is the item ‘Lancashire Adult Social Care’ that now appears on my Council Tax bill?

Therefore there are now two elements of the Council Tax charge that relate to Lancashire County Council:

The charge for ‘Lancashire Adult Social Care’ that now appears on my Council Tax bill has almost doubled from last year’s charge, but the bill only shows the increase at 2%. Why is this?

The charge for Adult Social Care is explained in the previous question.

Effectively for 2021/22 Lancashire County Council have increased their elements of the bill by 3.99% in total – split between 1.99% (actually shown on the bills to one decimal place as 2.0%) on their main charge, and 2.0% for Adult Social Care.